If you dog has any feelings about the vet that aren’t warm and fuzzy—it’s time to change up your vet visit routine.

Before Oz’s anxiety disorder started to really rear it’s head, for each dog’s vet appointment, I would always sit and wait in my vet’s waiting room, as I thought any good vet goer should do. And over the years, I’ve collected countless experiences of dogs staring and growling at mine, owners allowing their hyper-social dogs to scramble over to mine without an invitation, dogs literally shaking in fear as they stare, eyes black, at the hallway to the appointment rooms. I’ve seen mine and other dog’s anticipation build as they wait to the point where they’re an exploding or shrinking mess by the time the vet tech calls their name. And slowly, I’ve seen my own dogs’ experiences at the vet slowly start to disintegrate.

This became the most pronounced with my youngest, Oz.

While I still counted his age in weeks, Oz was fairly neutral when it came to the vet. It wasn’t his favorite place in the world, but I had put enough effort in to show him that it wasn’t the worst place ever either. Yet, as his feelings about the slippery table my vet insisted on using grew and the lack of separate entrance to the office started to become very apparent, I could see Oz’s anticipation in the waiting room start to build as well. Even if we only waited for a short time, I could feel his muscles start to tense and see his eyes start to grow blacker—both still so subtle, only noticeable to me, who knows him best. And as his general anxiety grew and counting his age in weeks moved to months, anything that happened in the vet’s office started to seem much more worrisome than the time before. So I stood up for my little guy, and I made a change.

Oz’s feelings started to change. And the waiting room was larger, but the same situations still played out every time. So I discovered something wonderful about our new vet—and it was time for our second change.

2) We started to skip the waiting room

Instead of arriving and going in with Oz right away, I started going in alone and letting the front desk know we were there. Then, instead of enduring the stress and anticipation, we waited outside. We quietly sniffed around the cars and amongst the grass and trees. We added a “de” to that compression we were feeling in the waiting room. Then when it was time, a very nice vet tech would poke her head out of the side entrance and we’d sidle in, stress free.

And I know not every vet will have a side or back entrance, but at the very least, if you can’t switch to one that does, most vets have an easily accessed outside to wait in. Many vets will work with you, if you just ask.

Ever since we’ve settled in to our new routine, pretty much anything can happen inside that appointment room and Oz’s feelings stay the same. He LOVES his vet. Despite fingers being stuck up in butt, or blood being drawn from a vein in his neck, his love perseveres as his vet kindly celebrates with hugs and affection after each bit.

Your dog may never love the vet, and that’s fine. But your dog can learn to be neutral, and these small steps can help them immensely on that journey. 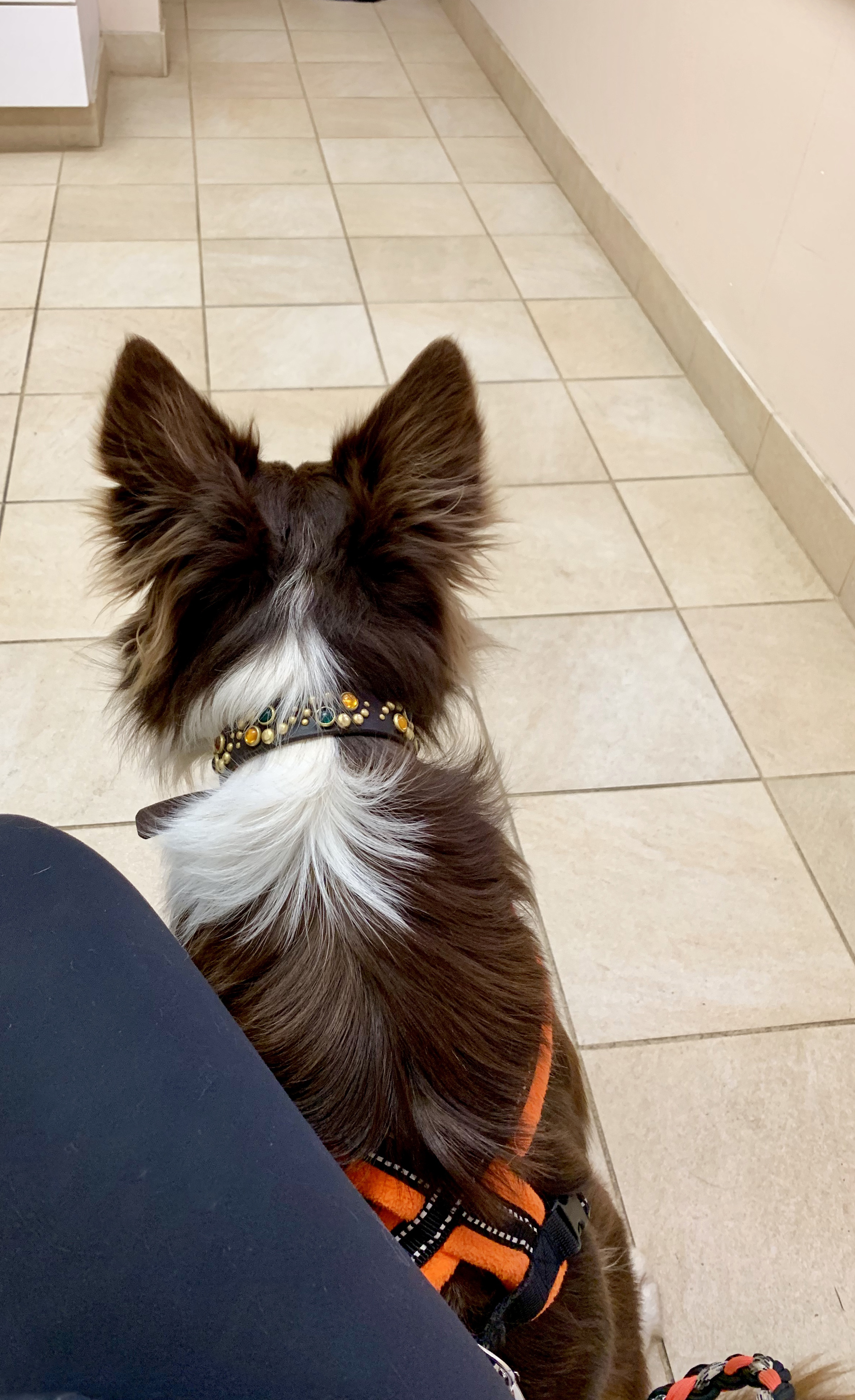 Oz waits patiently for his favorite vet to enter the room.